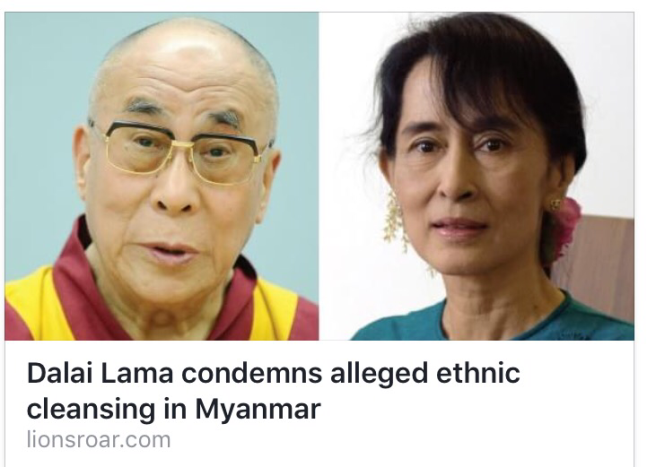 many in the world politic have been dumbstruck by Aung San Suu Kyi’s seemingly tone deaf lack of response over what is generally considered now to be a genocide of the Rohingya Muslim population in Burma renamed Myanmar by the military junta. Buddhist publications have been writing about this very non-Buddhist movement, led by violent Buddhist monks. Buddhist by name only, certainly not in the moral or ethical philosophy. Buddhist leaders have been speaking out, though it has seemed off the radar. i posted over a year or so ago an essay by well knownBuddhist teacher Jack Kornfield about this tragedy. Rohingya have not had any officially recognized citizenship in Burma even though they have had a presence there for generations.the stakes though have been raised by the increase in horrific violence against the Rohingya by this rogue Buddhist order and military actors,  and their mass fleeing (hundreds of thousands of refugees) from harm along with Suu Kyi’s now vocal denial that this atrocity is even happening. she has now skipped a UN appearance due to increasing criticism, further isolating herself.

i had read a while back that the Dalai Lama, a fellow Nobel Peace Laureate, had contacted her regarding this issue to no avail. he has now also issued a letter.

what has caused this fall from grace for Suu Kyi who her self underwent oppression and decades of house arrest, receiving the Nobel Peace Prize for her steadfast nonviolent protest and moral authority against violent oppression by the military junta, to upon release and rise to power, only ignore horrific violence against the Rohingya? i heard a news story on the radio that her father, in fact, was quite dismissive of the Rohingya when he was in power and believed they shouldn’t be considered citizens or have the rights that come with that recognition.

has the apple not fallen far from the tree? are we seeing a different side to Suu Kyi? only time will tell, but meanwhile the Rohingya are suffering from targeted violence at an increasing rate and Suu Kyi has betrayed both the Nobel Peace Prize given to her and her image as a Buddhist leader.

may there be peace and an end to this suffering. 🙏🏻📿

One thought on “fall from grace?”